Areas in RED should be noted.
From:  Center for Public Integrity
Meet Koch Industries -
The ad we ran on a Times Square superscreen!

“The Kochs are on a whole different level. There’s no one else who has spent this much money. The sheer dimension of it is what sets them apart. They have a pattern of lawbreaking, political manipulation, and obfuscation. I’ve been in Washington since Watergate, and I’ve never seen anything like it. They are the Standard Oil of our times.”
- Charles Lewis, founder of the Center for Public Integrity 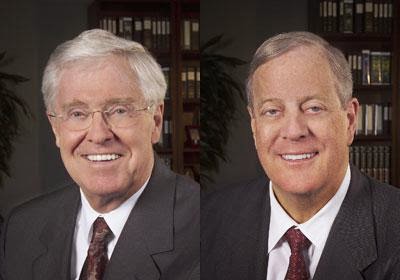 The Koch Brothers, Charles Koch (left) and David Koch (right), own and operate Koch Industries, the largest private company in the United States. Their combined net worth is over $40 billion. Below is a record documenting their environmental violations, funding of climate change deniers, political influence, and financial backing of the Tea Party.

The Koch companies have a notorious environmental record.
Some of the more egregious examples include:

Posted by Melinda Pillsbury-Foster at 10:24 AM