This has certainly been a week for Koch News.

First, Congressman Tim Griffin cooperatively goes along with the fiction the Mayflower toxic spill is a thing of the past by suggesting the 20 houses, which last year were inundated in Tar Sands Crude, would make perfect housing for tornado victims. This makes it look like official sources agree living in the homes is just perfectly fine.

That hum you hear is Exxon attorneys typing and gloating.

Is Congressman Tim Griffin really that dumb or was he paid off? Time to closely monitor his campaign donations.


One victim of last year's disaster, still struggling with her health commented that on hearing about housing tornado victims in Northwoods her heart dropped and she felt nauseated.

Her own home was not in Northwoods, where the 20 homes grudgingly purchased by Exxon was located, but it was still so badly impacted she still cannot live there, or even visit it without risking the traumatic reaction which has destroyed any normality in her life. Today she is also terrified to speak out for fear of what will come next.


But we can certainly imagine that Rex Tillerson, CEO of Exxon is delighted at the idea he will be getting rent money from FEMA for homes which otherwise would never again be occupied. 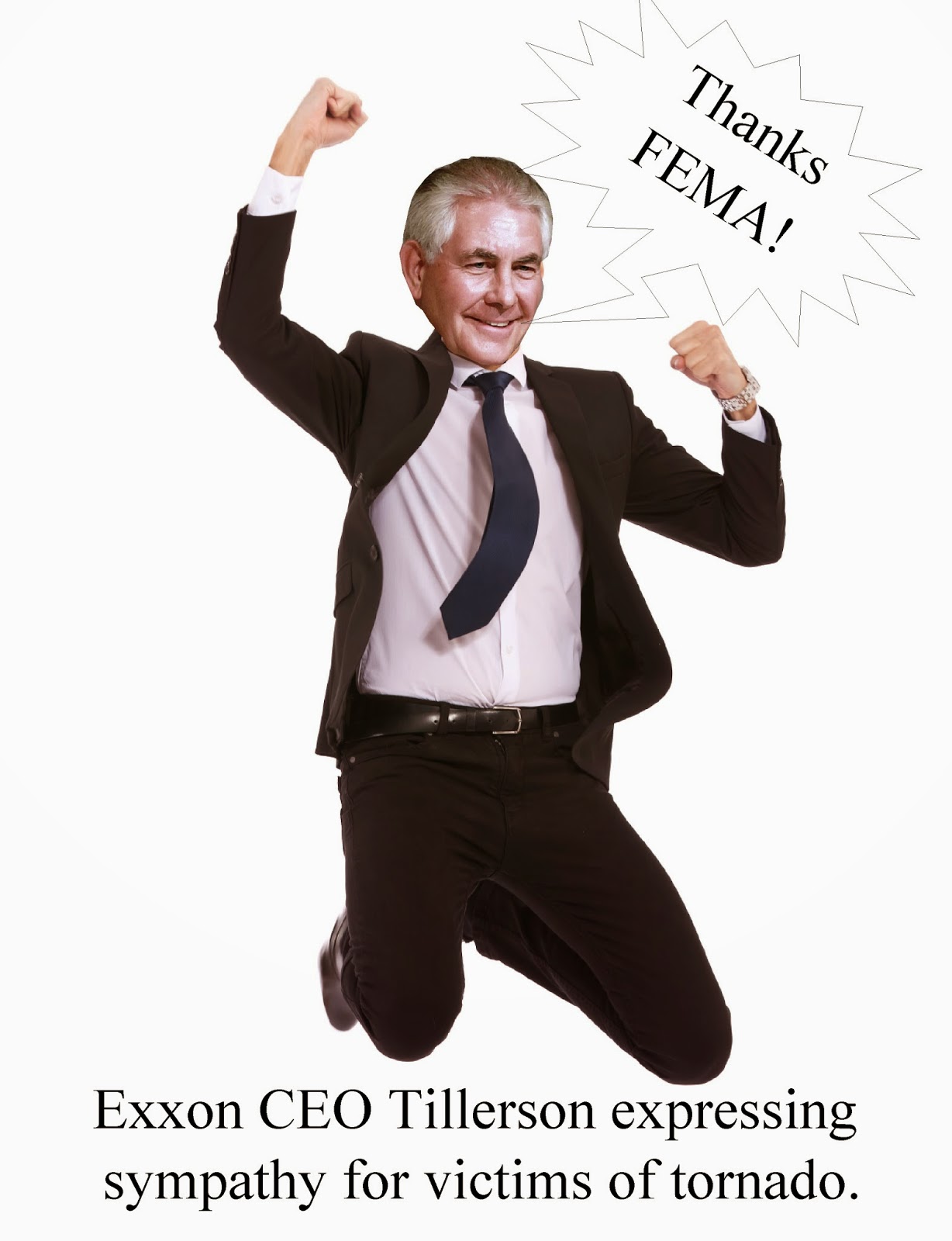 It would really be a better idea if Griffin and Tillerson and others who caused the problem of the original spill moved to Northwood.   There are, remember 20 houses there sitting vacant and ready for oil executives to move in. They can find a golf course and spend quality time knocking a small ball around, better for their karmic  than knocking small people around - until their health starts to deteriorate.

Isn't this a refreshing thought? Those responsible for the losses and suffering caused in Mayflower  loaning their up-scale homes to the current victims.
Tillerson could have two houses all to himself.

And then there was the exciting possibility of the debate on climate change proposed by Billionaire Tom Steyer. Steyer asked David Koch to debate him on the subject. The Kochs responded they are not experts.

What? Not experts?  How can that be - they hire so many Think-Tankers who just how to produce what you want to hear.

Heck, they could have used one of those handy little mics George Bush liked so much during the debates.Then Ed Crane and some of his Flunkies, Lick-spittles and Toadies could come out of 'retirement' to murmur suggestions so David wouldn't have to know anything.

If David Koch is concerned about meeting scary fellow billionaire Tom Steyer perhaps he would like to debate meek and mild David Lincoln for a debate on the subject, this summer.  An event is now in the planning stages.

Given how much money they spend talking about the facts and open debate and demanding a debate start, they should at least line up Ed Crane and his sundry experts, get the Mic, and simulate delight.

But saying you want something is different than getting it. David Koch was really energized by the possibility of facing Steyer, as you can see below. 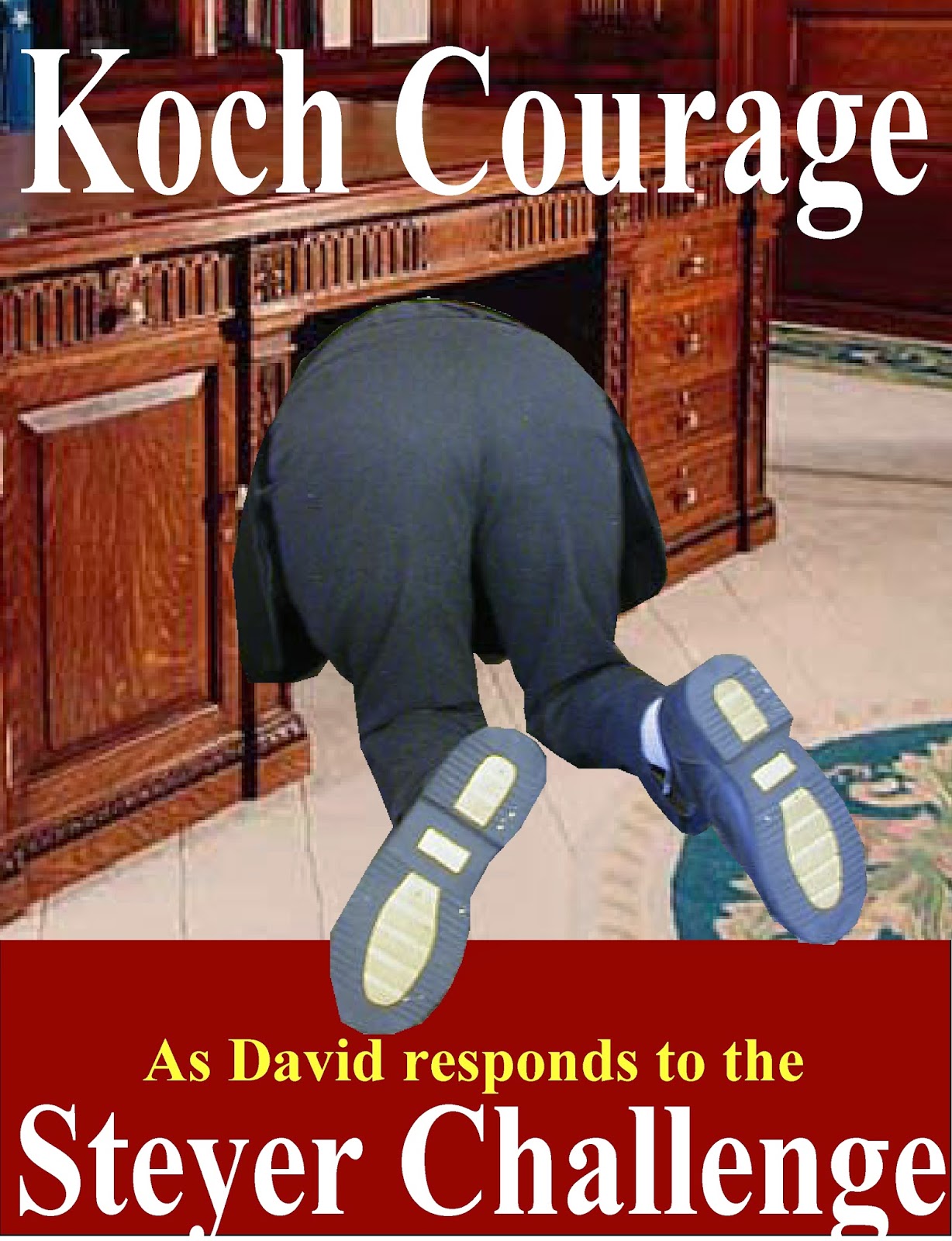 (For a very few the graphic above might seem slightly familiar, and actually a variation of it was used to illustrate a similar story on courage about another individual, an acquaintance of David and Charles' who they met at the 1979 Libertarian National Convention in Los Angeles.  You can view that story HERE.  More intriguing recollections from the formerly obscure  lives of the Kochs are coming.)
Posted by Melinda Pillsbury-Foster at 3:15 PM