No. 8 - Friday Night Special - Why the Kochs Don't Warn the Sheeple!

When the 'Koch Method' is used: 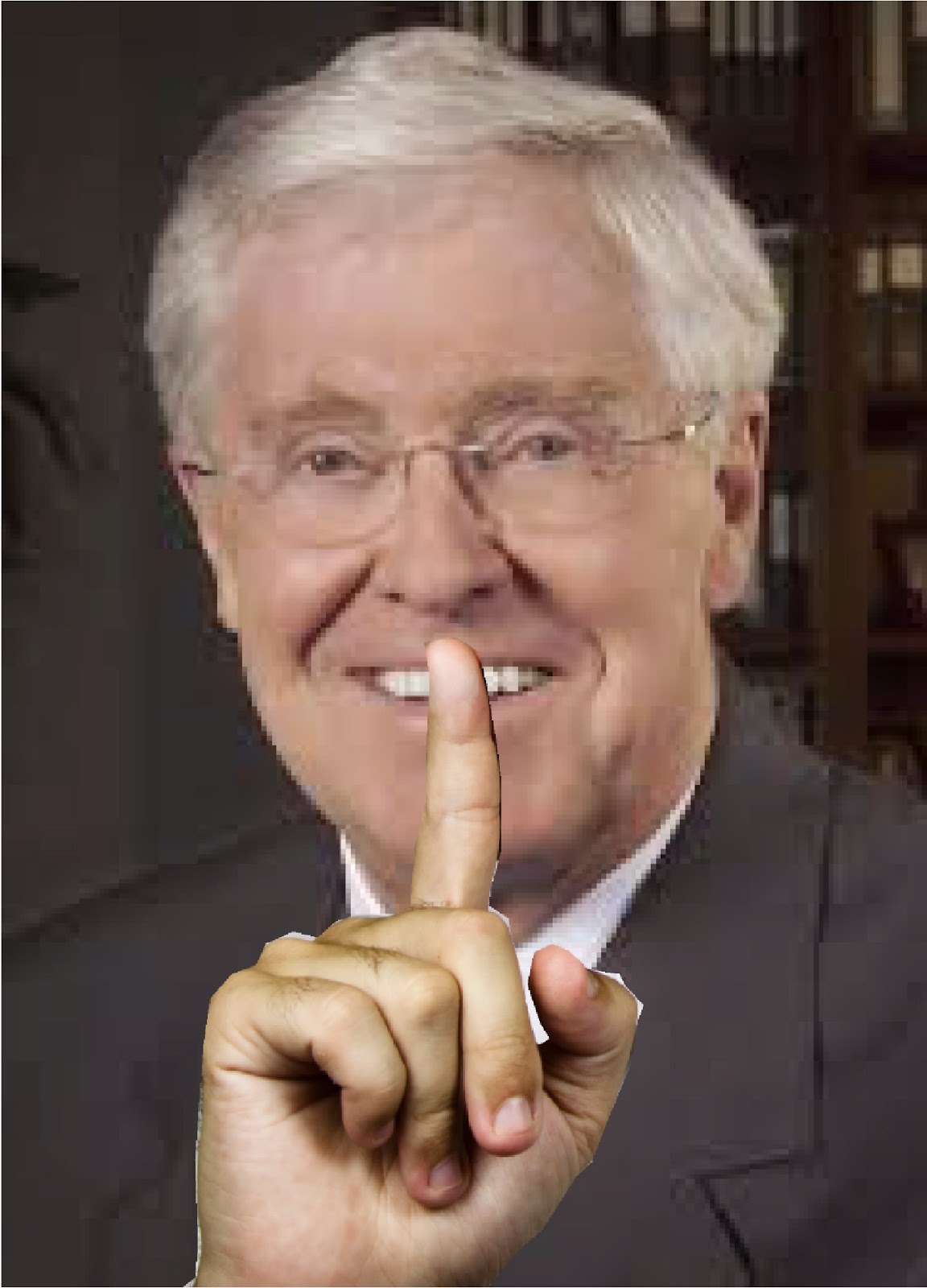 In the first hour after a Toxic Event begins a torrent of toxins and poisons rush out of the broken pipe, dispersing into the local area. This conforms to a pattern which can be calculated.

Benzene, Toluene and Hydrogen Sulfide share these attributes, as we demonstrated in No. 7 – Friday Night Special, last week. These highly volatile and toxic chemicals impact both air and water and all living things they contact. This happens immediately both through breathing in Benzene and through contact with water, which has also been exposed.

In No. 8 we are focusing on how fast and widely Benzene is dispersed to show you what needs to happen to change the behavior of Big Oil.

Continuing to breathe Benzene, for which we present profiles for two incidents, using the higher amounts from the Kalamazoo Toxic Event to what took place in Mayflower, Arkansas you can see why knowing what left those pipes, and how much, matters.  The information must be available not years later, but within minutes.

In a very short space of time breathing Benzene or the other toxic chemicals used by Big Oil can have permanent impact on people, leaving them with a heightened vulnerability to later exposure.

But since this is carefully not documented by the companies responsible this provides a useful exit from accountability for them. We are going to show you how to close the exit.

Clear and reliable models for what will take place have been available for a long time.  Enforcing the use of these in real time is part of the solution.

We produced the models below using open source software freely available through The Office of Response and Restoration.

Again, why is this this not being used and the information made immediately available to people at risk along the multitude of pipelines now in place across America?

Because folks like the Kochs know this would nail them big time. Accountability would cut into their profits. So, let's not hear any more talk about how well free markets work when those doing business can externalize their costs, forcing the consequences of their irresponsibility on others using asinine justifications of the 'public good.'

This Libertarian says, “Hold the Kochs responsible instead of allowing them to evade disclosure by using honorable rhetoric as cover for criminally irresponsible behavior." 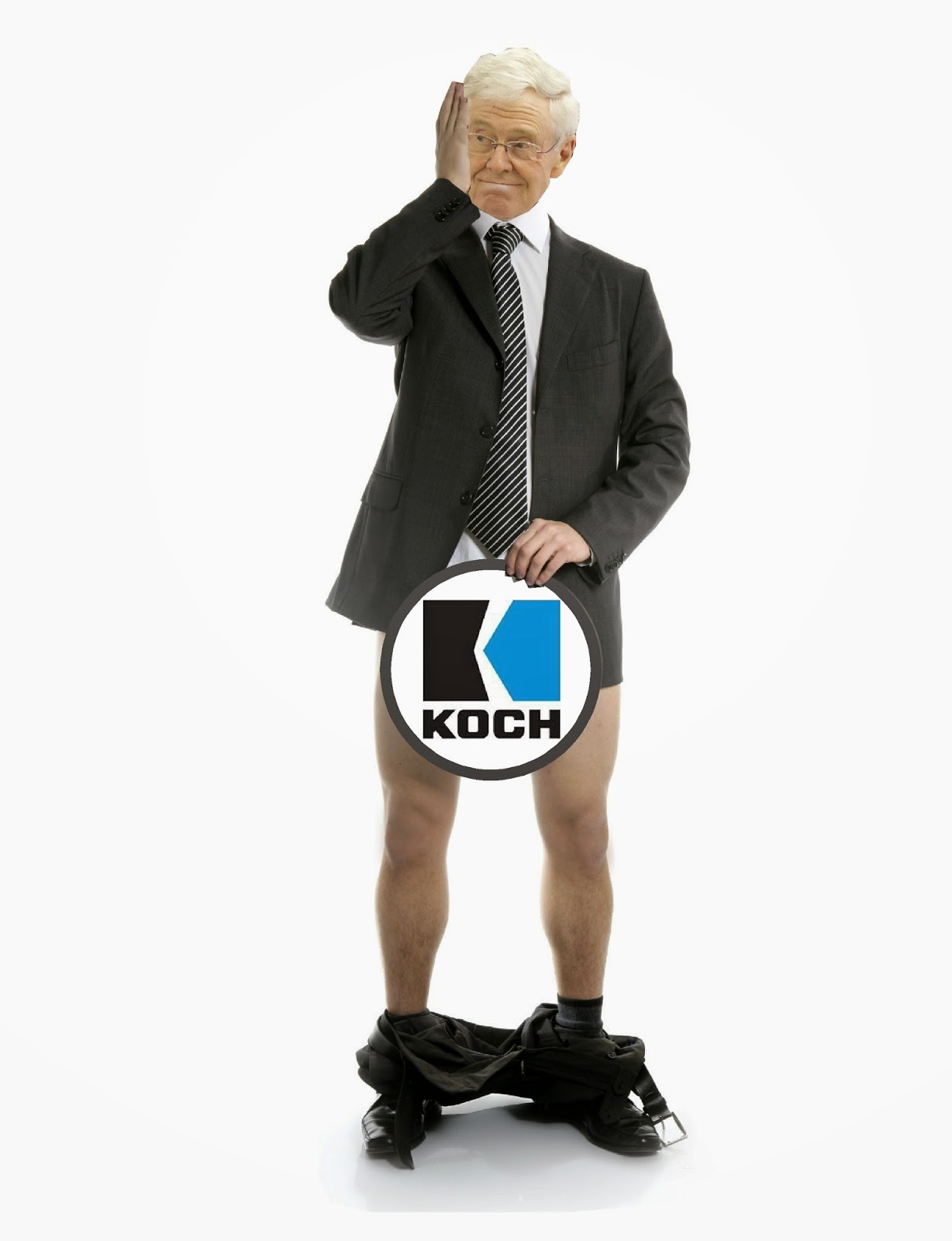 We produced the simulation below, using the amount of the spill and what would have taken place if it had occurred in Mayflower, Arkansas to demonstrate what is possible. After you see this we'll tell you what needs to be done to stop the Big Oil in its tracks and make them accountable.

The two existing programs, ADIOS, (Automated Data Inquiry for Oil Spills), which provides models for how types of oil weather. This means how they undergo physical and chemical changes, in the marine environment. ALOHA, which you heard about in No. 7, exist.  Used together we calculated the distance and size of the threat zones for Benzene in the Kalamazoo Spill-size scenario.

This chart shows that the level of Benzene in the air after the Kalamazoo River spill begins at about 6 ppm, (parts per million). As you can see, most of the impact is felt in the first hour. We used ADIOS2 for calculating air dispersion and weathering of the type of Tar Sands spilled, Cold Lake Blend, during that critical period.
Working from a database of more than a thousand different crude oils and refined products, ADIOS quickly estimates the expected characteristics and behavior of spilled oil. It was designed for just this use.
Using the ADIOS model together with the previously described ALOHA model the extent and size of the threat zones for Benzene in the Kalamazoo Spill-sized scenario are clear.

These programs make models available fast enough to be used in real time, providing alerts to the areas which are being impacted.

As the graph below shows, the Benzene threat zone extends for more than 1.5 miles where the initial Benzene concentration in the air could be greater than 50 parts per million in the first hour.

Below is our simulation using the profile for the Kalamazoo River Tar Sands Spill in 2010 and the Toxic Event in Mayflower, Arkansas of 2013. 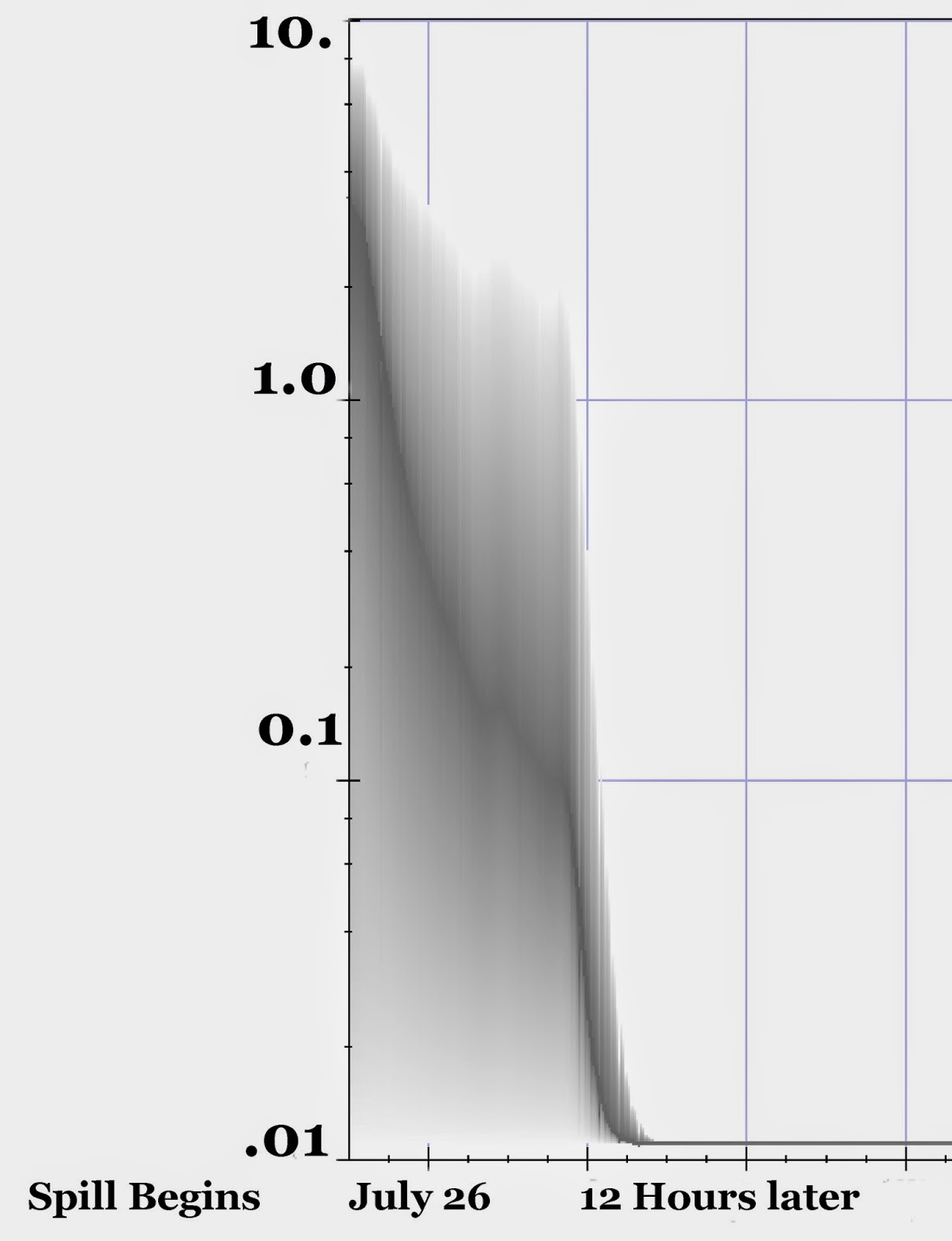 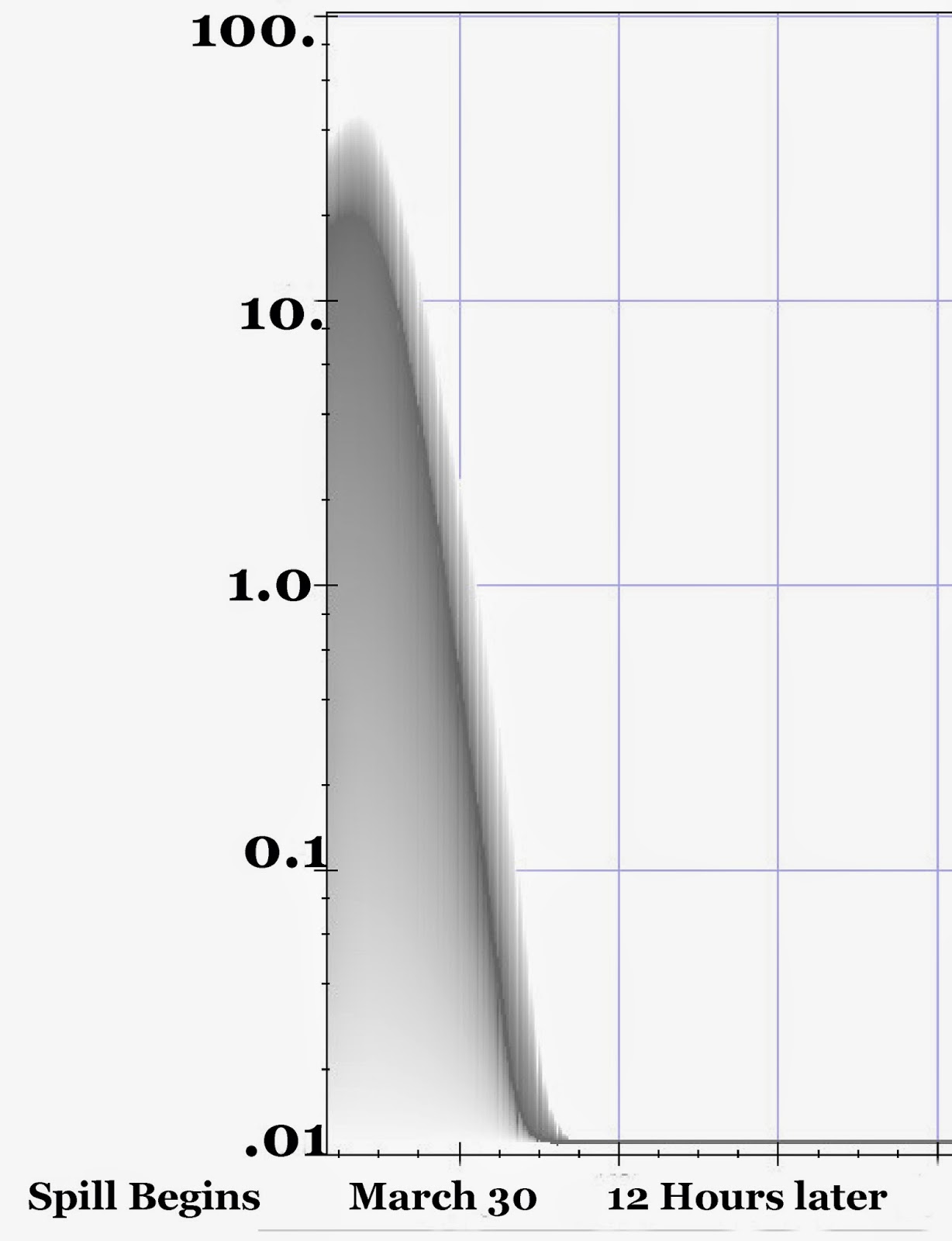 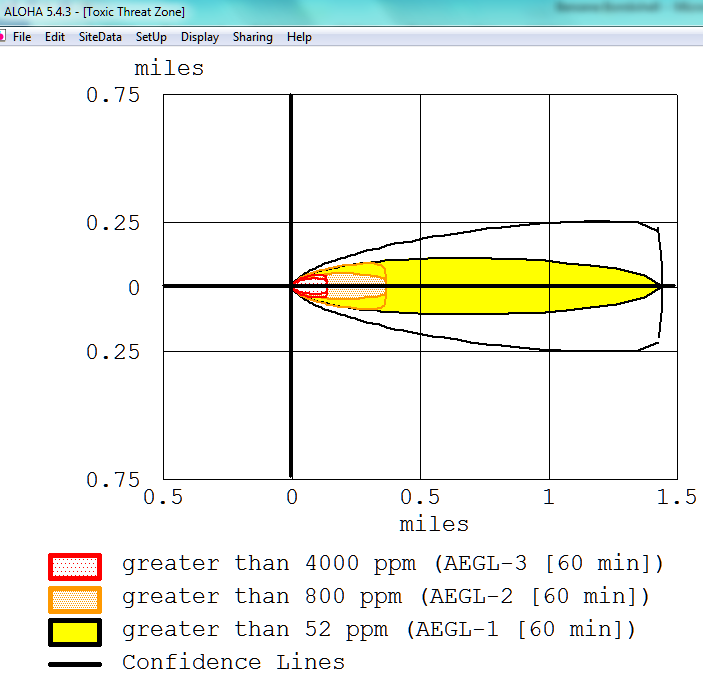 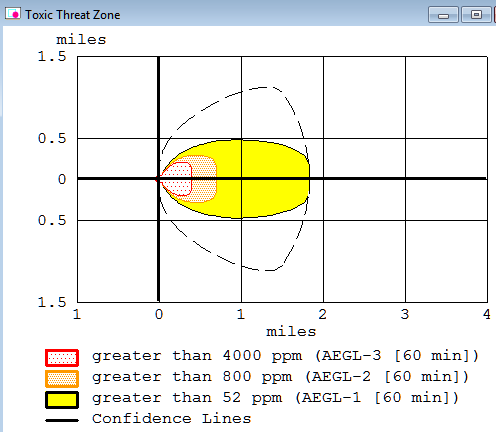 No. 9 - Which will be available in a few days, will show you what can happen when one of these Toxic Events takes place in a major population center along the KXL pipeline.


The Elephant in the Room question which must be confronted is this. 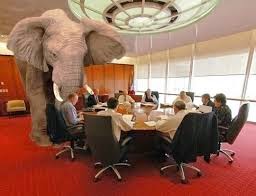 What action do we, the people, take now?


When it is clear you can only expect irresponsible behavior, you accept this as a fact and legislate accordingly. The problem must be solved.  There must be accountability.

Minimize the Impact of Toxic Events
Healing the Hazards
A Narrative

Posted by Melinda Pillsbury-Foster at 11:05 AM