Taxpayers have been subsidizing exercises for a possible terrorist attack in 2004 with exercises carried out by the FBI.  Why isn't this on the books of such corporations as Koch Industries as a business expense?

You can ask, but they will never answer.

Possible explosions resulting from the very unlikely possibility of a terrorist attack were calculated by the FBI.  This included unexploded bombs, simulated hostage takings analyzed, handling injuries and looking around the tanks for suspicious persons.

Dozens of companies store about 50 million barrels of U.S. and Canadian oil in Cushing, a town of about 8,000 people.

Then, someone said, “ "Then somebody said, 'Hey, we're in Tornado Alley."  A significant pause followed.

The biggest disasters are natural and you would think people as wealthy as the Kochs would know this. But then again, they probably do. Wichita, Kansas and Manhattan are a long piece from Cushing, Oklahoma, Ground Zero for Big Oil. And we really mean, 'Ground Zero.'

The people who live and work there, mostly for the oil companies, have gotten the message. Houses are on the market as people put distance between themselves and the potential for becoming so much meat on the grill.

So, what would happen to a community if a Kalamazoo-sized spill (1 million gallons) occurred at a critical junction of the KXL pipeline which has the capacity to transport 25 million gallons of oil per day?

Glad you asked.  That is a question we are prepared to answer. 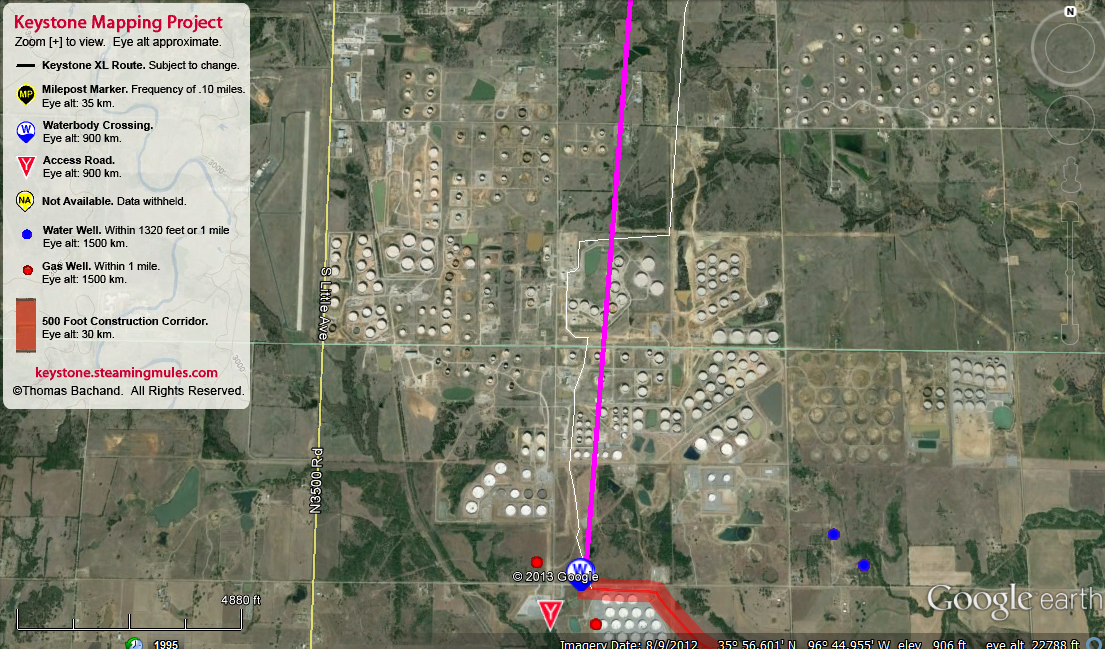 Cushing Oklahoma is known as the “Pipeline Crossroads of the World” with the largest known tank farm anywhere. First, because the KXL pipeline already runs through it as shown by the purple line in the Google Earth image above. Second, because over 25 major pipelines intersect at this point and are shipping in or out oils and other fuels with a constant threat of fire of explosion.  More than 70 percent of the petroleum that’s shipped in the United States flows through the pipes that intersect here. This is best seen in the Bloomberg Illustration below which shows the pipelines and volumes at the Cushing oil hub. 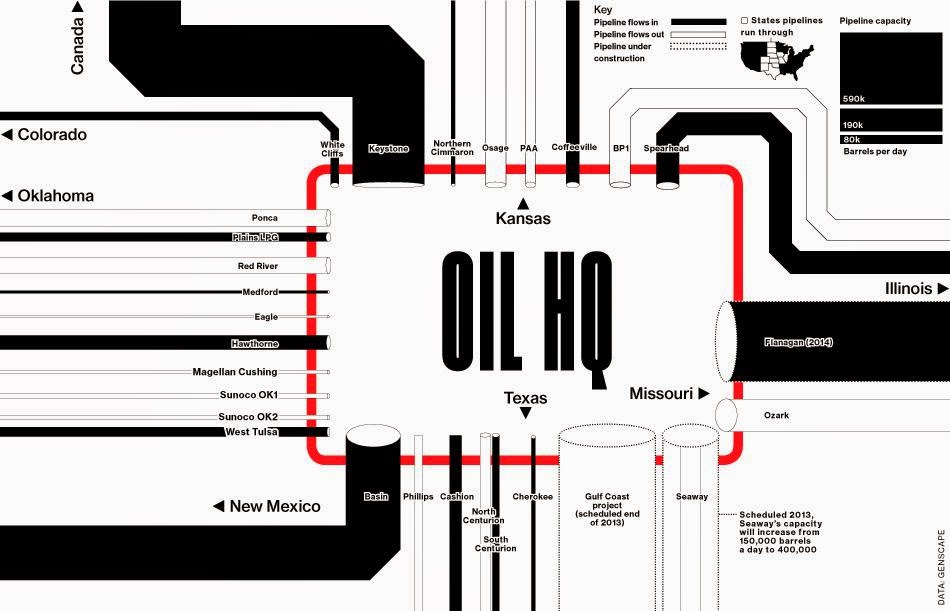 Oil Pipeline Flows In and Out of Cushing, Oklahoma
http://www.businessweek.com/articles/2012-09-27/in-the-pipeline

We have modeled the cloud of toxic Benzene which would immediately spread from a potential pipeline break in the first hour after a large spill from the KXL Pipeline in Cushing, Oklahoma

(See the Aloha Model and colored Benzene threat zones in the Google Earth image below. 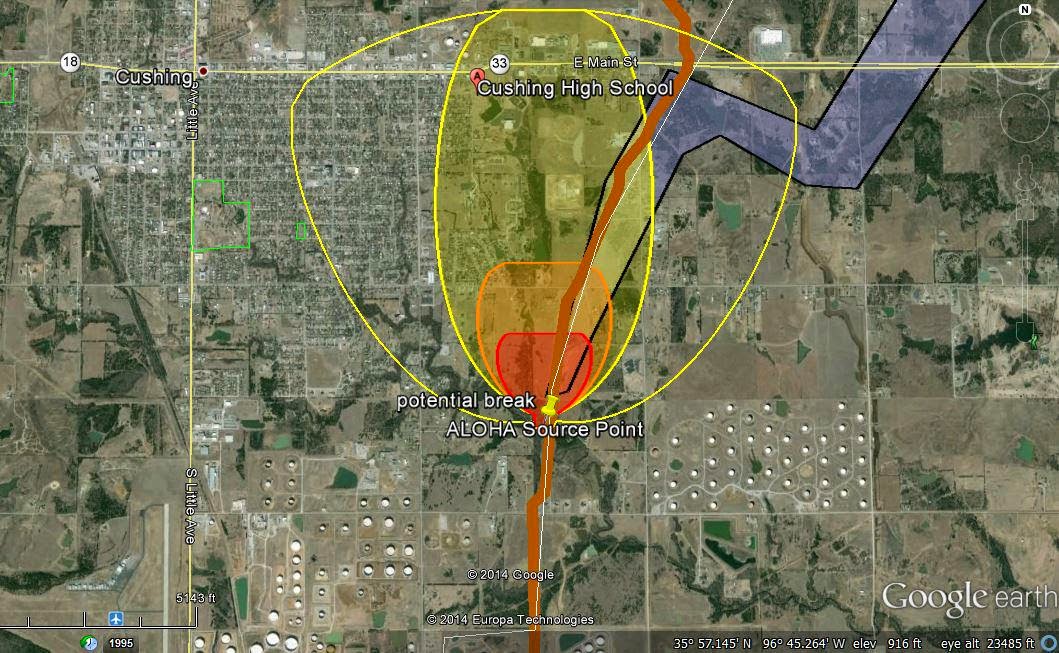 Possible Benzene Plume for a large

Tar Sands spill in Cushing Oklahoma
(Got the High School!)

This plume would likely spread for nearly 2 miles blown by the wind and would likely engulf the local High School and half the city. The yellow confidence or uncertainty lines enclose the region within which, about 95 percent of the time, the gas cloud is expected to remain.
We have modeled parameters similar to conditions at the Kalamazoo River Tar Sands Spill in Michigan in 2010. We have also assumed a Cold Lake Blend of Tar Sands since this will be transported by the KXL pipeline and it was the major component of the Kalamazoo spill.

Simultaneously, a poisonous plume of Hydrogen Sulfide would spread along the ground blanketing the town of around 8000 people across more than 6 miles (the limits of the Aloha model shown below). 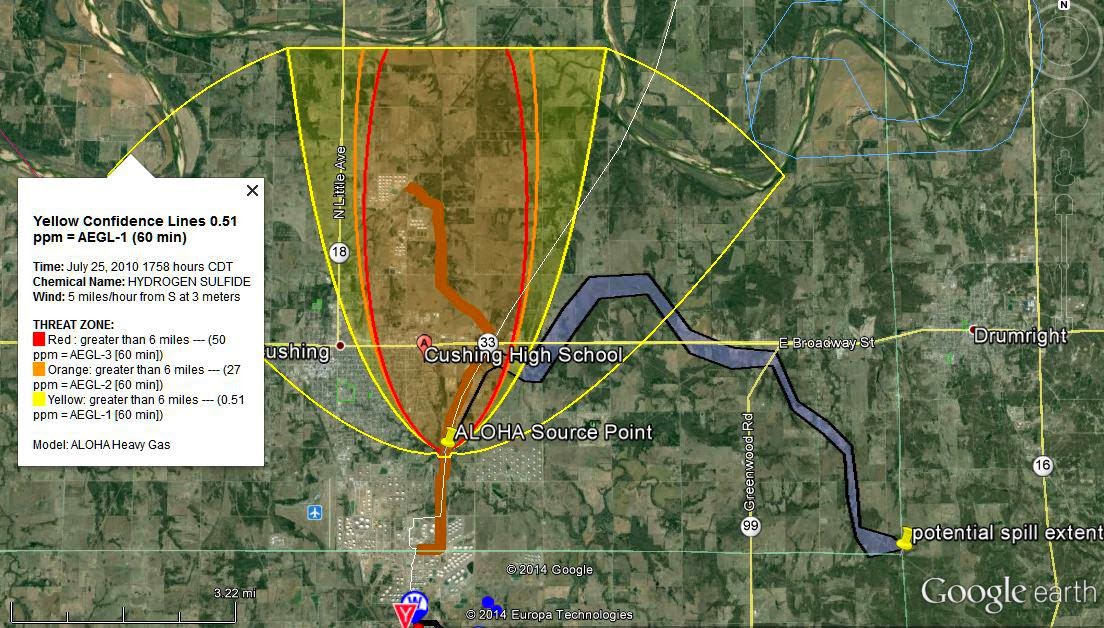 Later, there would be a repeat of the Kalamazoo River spill with the tar sands oil finding a route to the nearest stream or creek and contaminating the water over 10 miles downstream. The likely creek spill extent is shown in blue above. 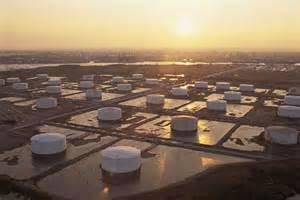 Presumably the first responders are extremely well trained for an oil or tar sands spill, since the gigantic tank farm consists of more than 300 oil shipping and storage tanks with a capacity to store about 70 million barrels of hydrocarbons. Some terminals have published their action plans, so it is surprising that their emergency planning and response models have apparently not been made public. 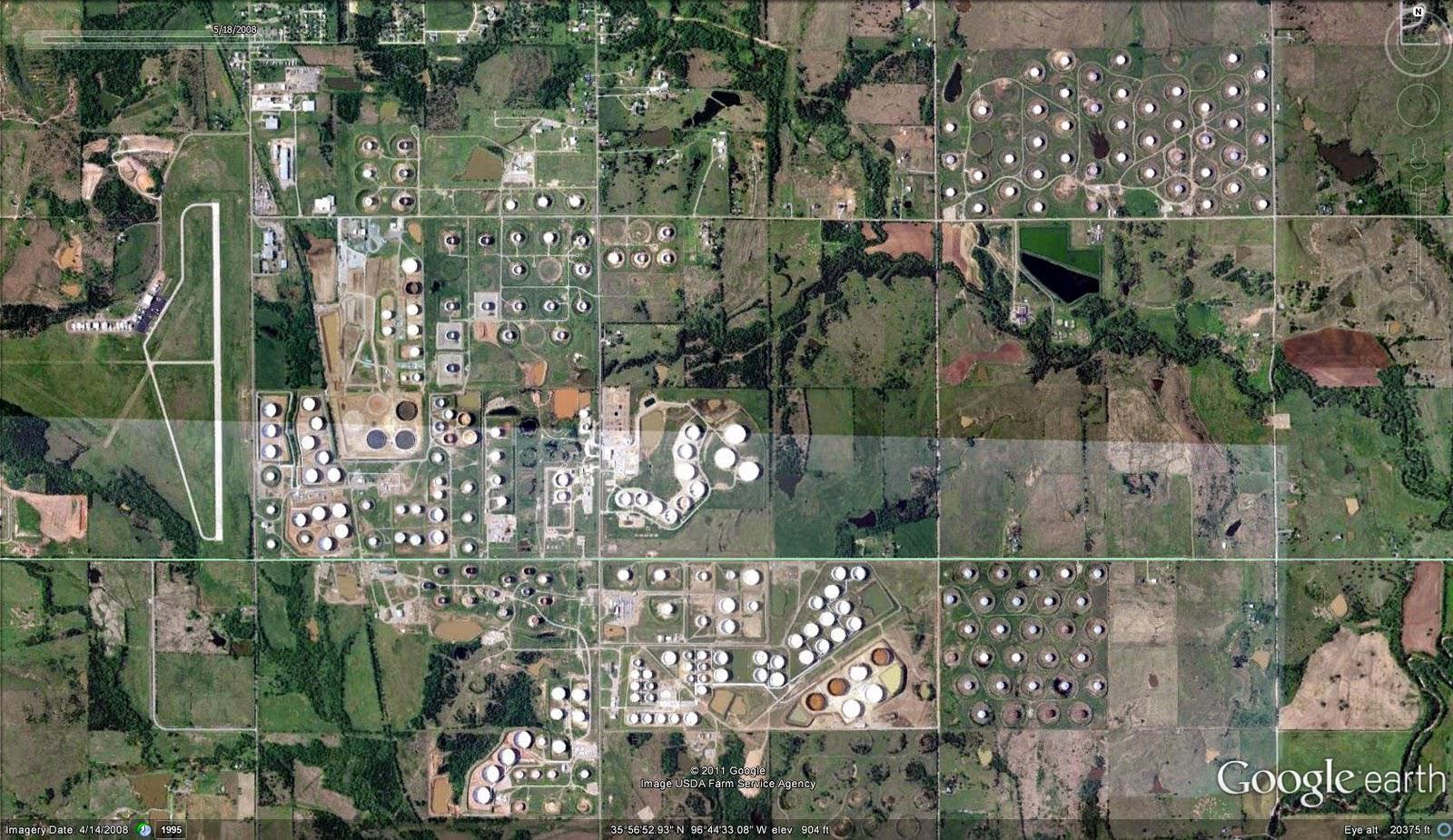 In May 2013, just two weeks before a devastating tornado hit Moore Oklahoma, Cushing Emergency personnel conducted a drill based on an F-5 Tornado disaster scenario. The drill revealed that once communications are knocked out, the terminals are basically on their own for 24 to 36 hours until the National Guard can be fully mobilized. According to Cushing Fire Chief Chris Pixler, “At the initial tornado strike, we’re already out of resources,”
http://stateimpact.npr.org/oklahoma/2013/06/03/what-would-happen-if-an-f5-tornado-hit-oklahomas-cushing-oil-hub/
And here is a map which shows which Petroleum Companies use Cushing.  All of our favorites, including Charles and David! 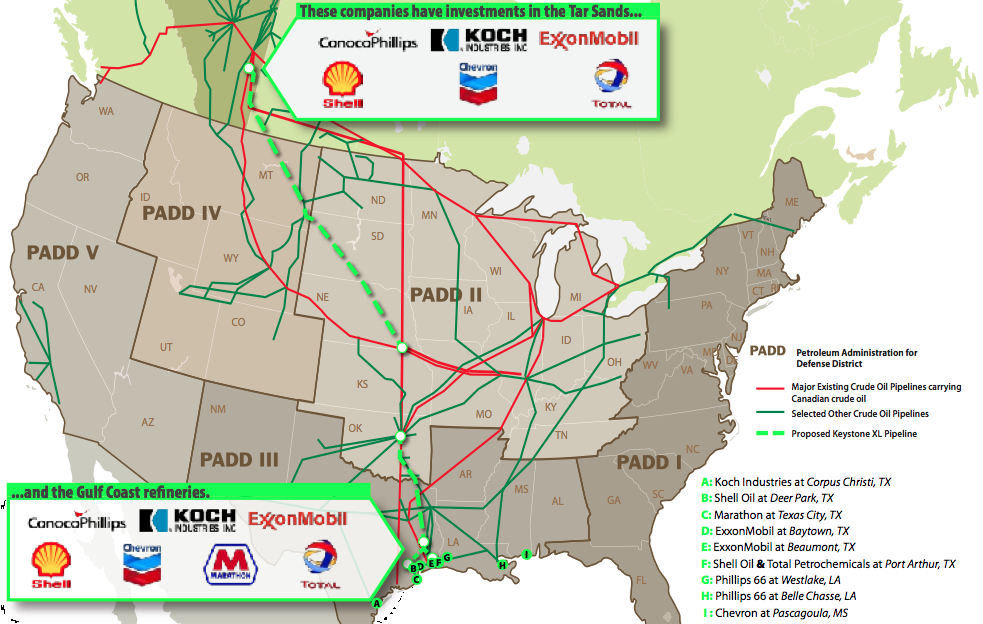 This is not a good situation to be in under the best of circumstances.  For such a strategic and vital industrial complex which handles roughly 10% of the U.S. Crude Oil Inventory, it is unacceptable. If we can have forward military bases in Iraq and Afghanistan, is it too much to ask to have National Guard troops as ready and prepared to protect our strategic assets and adjacent neighborhoods as we were to defend Iraqi oil fields and the gold in Fort Knox. Do we even know if there is enough respiratory equipment available for those who might not be able to immediately evacuate a large area?
Of course, Cushing itself won't need to worry about breathing for very long. 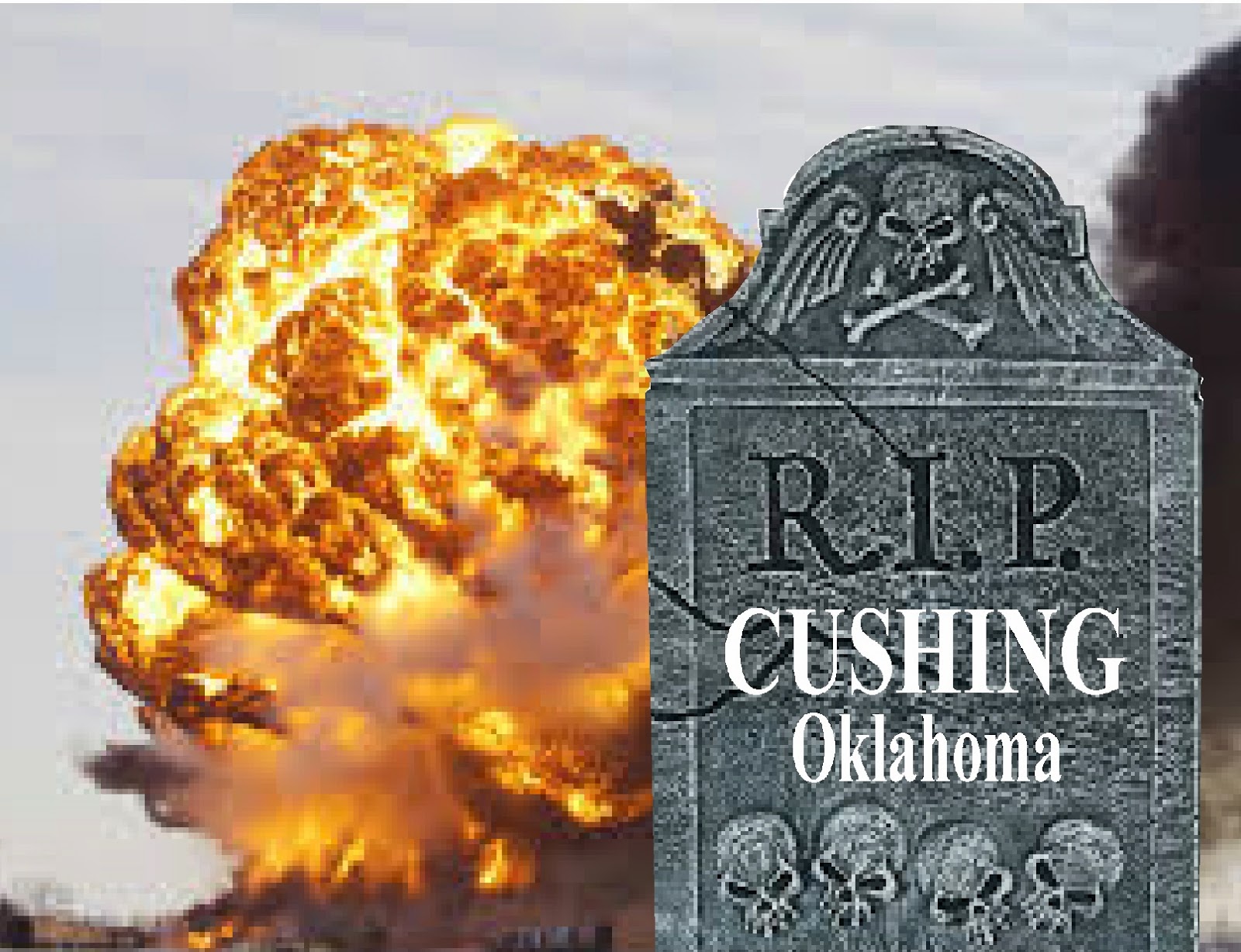 The only possible solution is to plan for the worst case scenarios with realistic emergency response models now and begin mobilizing those resources in advance.
Worst case scenarios must include the usual terrorist soft target and fire scenarios, as well as tornado and earthquake threats, but now must also involve total pipeline and tank failures and explosions. As we have learned since 2010, pipeline failures involving Tar Sands can be difficult to detect in time and can be devastating to surrounding communities since the condensate and diluent spread first. Too often evacuations come too late or are not extensive enough.
Only by involving local community leaders in disaster planning and informing the residents about the real risks and emergency steps to be taken can we hope to minimize health and safety impacts.
Steps must be taken.  Step over here to read about that.

Posted by Melinda Pillsbury-Foster at 4:15 PM