Exxon, the master media manipulators, have continued to hide or obscure many of the basic facts about the nature of tar sands oil spills and their health risks by referring to them as “heavy oil.” It has now been 11 months since the March 29, 2013 pipeline catastrophe in Mayflower, Arkansas, yet still many secrets remain. This series will pull back the curtain to answer some of the simplest questions which Exxon does not want us to ask and which they have flatly refused to answer. Finally, we will begin to answer these questions in surprising ways which will forever change the way we look at Alberta tar sands development.

The Secret Sauce
What do you get when you add a group of known cancer causing chemicals such as Volatile Organic Compounds (VOCs incl. BTEX) to a naturally occurring poison like bitumen tar? You get a dangerous toxic mess the oil companies call Dilbit, which is basically just pitch tar liberally mixed with natural gasoline. 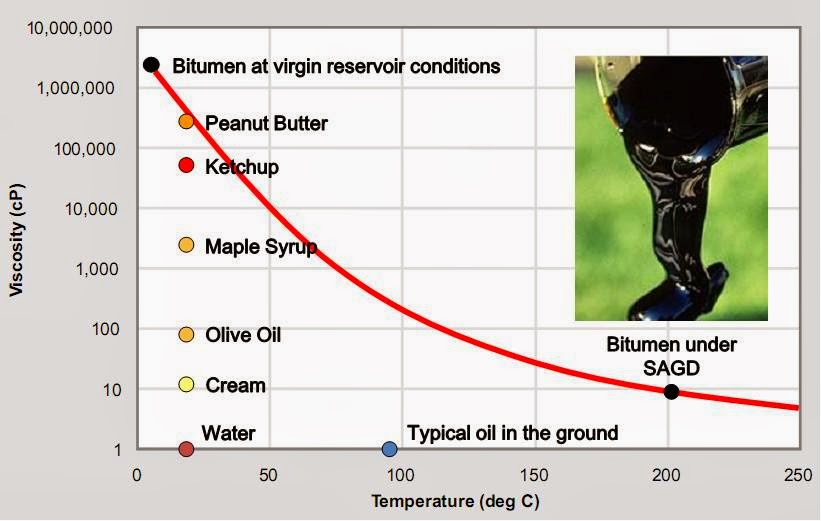 As we covered in Part 1 of this series, Dilbits often start out as “hockey puck” hard hydrocarbon Bitumen, and then are injected with chemicals and frequently steam heated to make it flow into the production pipe. Compared with other Heavy Oils, Wabasca Heavy crude is one of the Dirtiest, hardest and most resistant to flow of any oil in the world. As a result it must be combined with a high amount of Diluent as a highly toxic solvent consisting of natural gasoline. The Bitumen is blended with Light Oil/Condensates containing lighter hydrocarbons like Benzene, Toluene, Ethylbenzene and Xylene (BTEX), the toxic organic solvents added to make the Dilbits flow long distances in a pipeline (sometimes!).

CONDENSATE CON GAME
One of the Diluted Bitumens or Dilbits from Canada was identified in the Tar Sands oil that catastrophically flowed through the neighborhood of Mayflower, Arkansas from a ruptured Exxon pipeline on March 29, 2013. This Tar Sands spill of at least 5,000 barrels (210,000 gallons) spread into the residential neighborhood of Northwoods subdivision causing the evacuation of some 22 homes (at least 20 bought by Exxon) and the eventual destruction of 3 houses so far. The evacuation was due to contamination with carcinogenic VOCs and Polycyclic Aromatic Hydrocarbons (PAHs) which can persist for decades in soil, water and buildings and furniture.
Dilbit was also the type of Tar Sands oil which contaminated 35 miles of the Kalamazoo River in Michigan from a burst Enbridge pipeline spilling close to a million gallons of Dilbit in July 2010. This Michigan disaster was the largest on-land spill in American history and has already cost more than a billion dollars in clean-up costs.
Amazingly, neither of these Dilbit pipeline spills would have been possible without the addition of Diluent in the form of Condensate. The Diluent was exported from the U.S. to Canada and back to Canada as Dilbit in a tragic cycle which greatly benefited the very companies which are principally responsible for these calamities. This is the untold story of where the Diluent poisons originated and how the responsible parties profited most from this dangerous and unnecessary trade.

Bitumen Toxicity
We have already demonstrated in Part 1 that solid, crude bitumen in the reservoir contains toxic Polycyclic Aromatic Hydrocarbons (PAHs), Volatile Organic Compounds (VOCs), hydrogen sulfide and heavy metals which are further released into the tar when it is steam heated.
In addition, Naphthenic Acids always found in Tar Sands, contaminate the water and are toxic to fish and amphibians. In humans and other mammals these acids may irritate the nose and throat and cause coughing and wheezing. However, Naphthenic Acids have not yet been tested for potential to cause cancer or reproductive impacts.

Diluted Bitumen Transport
The specific Dilbit which oozed into the Mayflower Arkansas neighborhood in March 2013 was called Wabasca Heavy which originated from the Tar Sands in the Wabasca Field area of Alberta, Canada. The map below shows the Wabasca Field area near the Wabasca lakes (NE Corner of map) as well as the Pembina pipeline (in yellow) which goes to Edmonton with chemicals such as polymers and solvents to make the Bitumen flow.
Exxon Reported to the Pipeline and Hazardous Materials Safety Administration (PHMSA) that “before transport the dilbit is combined with corrosion additives such as Baker Hughes WAW 3049 water treatment additive [obsolete] which is also added by Mustang on its way to Patoka Illinois.”ii Other chemicals used in production and processing are considered proprietary and are kept secret.

Posted by Melinda Pillsbury-Foster at 9:42 AM