Q8. Can Wabasca Heavy Crude Be Identified By Its Fingerprint? Yes!

Fortunately, fingerprinting of the oil is still possible on the basis of GCMS (gas chromatography combined with mass spectrometry.) A chromatogram from Wabasca Heavy bitumen was provided to the EPA by the University of Calgary, Alberta (ESTS # 1346.1).

Source: ESTS 2013 - pg. 23
This Wabasca Bitumen reference standard sample reveals the following:i
The Total Petroleum Hydrocarbons of nearly 300 mg/g are about the same in the reference sample and the spilled oil sample indicating little change in overall oil content. However, due to the complexity of the bitumen in the sample there are few peaks of lighter molecules on the left hand side of the graph. This means there are essentially no simple, straight chains of carbon and hydrogen (normal alkanes) in the Wabasca heavy bitumen sample before it is mixed with condensate. According to the definition of bitumen in the region by Strauszii at the University of Alberta, this would have caused more bitumen to precipitate. In other words, simple hydrocarbon solvents are added as diluents at a later processing stage to make these tar sands flow great distances. These diluents and other additives must also be constantly balanced to keep the bitumen moving in solution. It is this tendency to precipitate bitumen in pipes which has historically slowed tar sands development and limited the number of refineries which can process it.
i Wang, Shendo 2013 Environment Canada for EPA
Oil Fingerprinting Analysis of Mayflower Spill Oil Samples
ESTS Report No. 2013-Rep04
http://www.epa.gov/region6/6xa/mayflower/2013-rep04_mayflower_ar_f-opt_062613.pdf

PAHs
The total target PAHS of the Wabasca heavy bitumen sample was under 2600 micrograms/gram or roughly one-third of the PAHS found in the spilled oil sample at Mayflower. 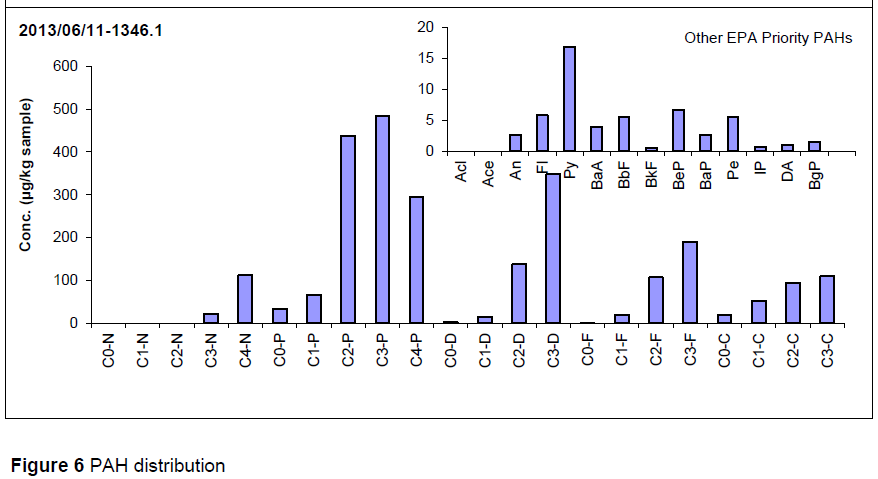 As shown by the chart above, the most toxic PAHs, the so-called EPA Priority PAHs (54 micrograms/gram) in the bitumen sample were roughly 40% of the spilled oil sample including known carcinogens like Benzo(a)pyrene (BaP 2.72 microg/g).
Recent studies have shown that PAHs are elevated in sediments at the bottom of six lakes surrounding the Alberta tar sands. The PAH levels in lakes as far as 50 miles away are more than 20 times what they were in the 1960s.

Posted by Melinda Pillsbury-Foster at 9:19 AM