The extremely high viscosity at Wabasca has necessitated extreme production methodsi including water, steam and polymer injection, steam assisted gravity drainage (SAGD), and Solvent Aided Processing (SAP). All of these production processes have released some of the most toxic hydrocarbon compounds from the bitumen and have added additional toxic chemicals (like surfactants) into the heavy oil.
Surfactants are added to make oil more slippery and thus improve recovery percentage. The chart below shows the toxicity of some non-ionic surfactantsii which may be used in oil fields to form emulsions with less foam. 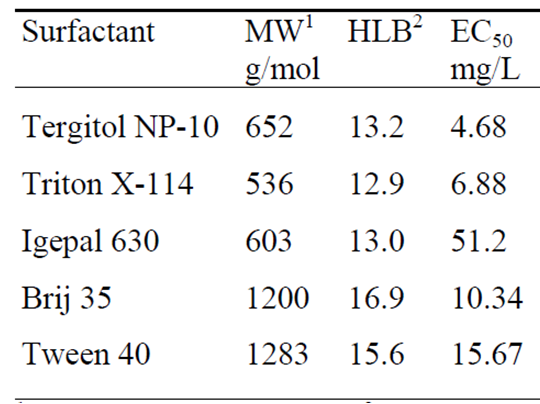 Those surfactants at the top of the chart with an EC 50 (concentration at which 50% of test organisms die) of less than 10mg/L are classified as toxic to aquatic life and those between 10 and 100 mg/L are merely considered harmful. Although the specific surfactants used in polymer floods in Alberta are usually not named, (proprietary secrets) Triton X and the Tween series have frequently been associated with surfactants in polymer flood operations in other areas.
Posted by Melinda Pillsbury-Foster at 8:35 AM